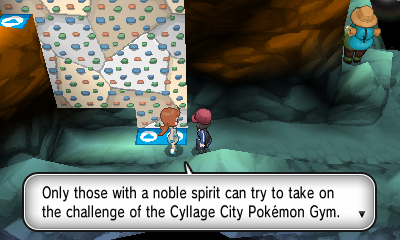 Hello and welcome to our new feature here at BoxMash! Every Friday we will be guiding you through one of the eight Kalos Region Gyms in Pok?mon X and Y, showing you everything you need to know to beat them all and get your badges. We will show you how to find the gyms, what Pok?mon they have and how you can defeat them, and even where to head next!

This week, we are looking at the second Gym in Cyllage City with Gym Leader Grant.?If you are reading this guide, you should have already beaten Pok?mon X & Y’s first gym leader, Viola. If not, check out this guide on the first Pok?mon Gym and get to beating Viola before even thinking about challenging the leader of the Cyllage City Gym, Grant! How to find The Gym

This gym is a bit later than the first so you have plenty of time to raise your Pok?mon. In order to find this gym, you need to first find Gym Leader Grant on a nearby cycle track. Grant is really big into training and fitness, and you encounter him just after he wins a big bike race. He is tired of training and happy to invite you to the Cyllage City Gym. Once you have spoken to Grant you can enter the gym which is a rock climb up a cliff. There are lots of paths to take, and none are wrong, it just might take you a bit longer to get to Grant. You should make sure you have some Pok?mon who can break stones before you enter the gym as you will need it for the rock climbing.?This gym is full of rock climbing walls which you must use to reach the Gym Leader at the very top. You will bump into four trainers on the way.?All these trainers are optional if you take the right paths, however, we think you should fight them all to get the most experience for your Pok?mon. Trainers in the Gym

Climb the wall to the right of the guy near the gym entrance. Climb up and to the right to get to the upper level and go up the stairs to find Rising Star Didier.?If you climb up the wall around the right side, you can skip this Pokemon Trainer. After Hiker Craig, climb back down the rock walk and take the left corner to the next Pokemon Trainer, Rising Star Manon. The next step is to climb up the rock wall near Rising Star Manon. One last Pokemon Trainer will be at the top. Go up the narrow climbing wall near the hiker and you will reach the Gym Leader Grant. Grant has just two Pok?mon in his team: the Fossils you had to choose from earlier in the game! They are: How to defeat Grant

As with most of the trainers in this gym, if you have a water or grass type Pok?mon you will fair pretty well with both Grant’s Pok?mon as they are both part Rock type. As we suggested in our 10 Best Pok?mon to Catch in Pok?mon in Pok?mon XY feature, if you chose Froakie as your starter Pok?mon he will come in handy here. Both Amaura and Tyrunt are really weak to both fighting and Steel types, so if ?you got a Torchic as a special online gift, all you have to do is evolve it into Cumbuskan and the battle is yours if you use his fighting-type moves. If you don’t have Torchic and want to use a fighting Pok?mon don’t worry, the martial arts bear-like Mienfoo can be caught on Route 8 shortly before Ambrette town.

Other types that will do well in this battle are Rock, Ground, Fairy, Dragon, and Ice types.

Tip: Grant may use a Hyper Potion on one of his Pokemon if it gets weak enough before it faints. Try taking them out quickly, or you may be stuck in a long battle.

After defeating Grant, he will reward you with the Cliff Badge, which means Pok?mon up to level 40 will obey you, and TM39 Rock Tomb, which lowers the target’s speed by 1 stage. You will also win P4000. Rock Tomb is a valuable addition to almost any Rock type Pok?mon’s moves. You can also now use HM04 Strength outside of battle.

Where to go next

To leave the gym after the battle go down the stairs to the left of Grant and use the climbing wall to go down. Slide down the two dirt paths to reach the gym exit.

Before heading for route 10, you should go north from the Gym to reach the cave entrance to the Connecting Cave. Here you can teach strength to a Pok?mon and push the nearby boulder to the right to make it fall into the hole. You can now reach TM40 Aerial Ace. Explore the cave, and you will find a backpacker who gives you?TM21 Frustration.?Just above the backpacker, push the boulder to the right. Then go south and push the boulder there. Using one of east exits of the cave, you end up in Rivi?re Walk, where you can go northwest back to Cyllage City and?use the northwest exit to journey on to Route 10: Menhir Trail.

Remember to come back here to BoxMash next Friday for next weeks installment: Shalour City Gym?and Gym Leader Korrina!