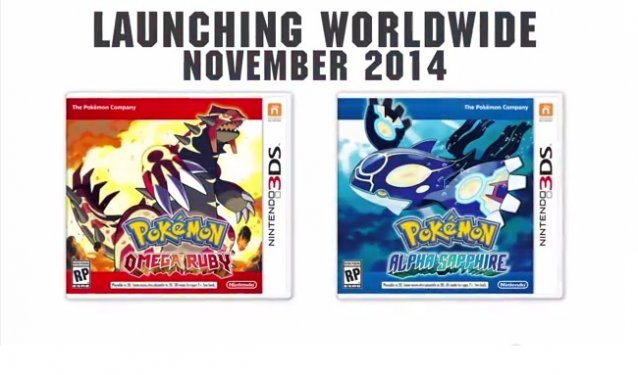 Pokémon fans around the world get ready for an awesome announcement: there’s going to be a brand new Pokémon adventure for release this November! The new games are called Pokémon Omega Ruby and Pokémon Alpha Sapphire and are coming to Nintendo 3DS and 2DS. Check out the announcement trailer from Nintendo below:

Although these new games are named after the older Pokémon games Pokémon Ruby and Pokémon Sapphire which came out in 2002, the trailer by Nintendo says that each game will be a “new adventure” that takes place in a “spectacular new world.” This seems to suggest that the new games will be completely new adventures, not just re-imaginings of the original games which fans originally thought they would be. But what will be in the new games then? Well, it could be any number of possibilities, as they could still be another take on the original games, or even be sequels, like B2 and W2 were to Black and White, or not even take place in Ruby and Sapphire’s Hoenn region at all. Nintendo’s video shows no gameplay either, so it is also unknown whether the games will be similar to the 3D design of Pokémon X and Y, or be more of a reworking of the original games graphics, or if new features like Mega Evolution or swarms will feature in them. The only thing that is for sure is that these games will be awesome for old and new Pokémon fans alike!

What do you think will be in the new games? Let us know your theories below or on our Twitter page! And if you’re playing Pokémon X and Y, why not check out our Pokémon X and Y Gym Guides for hints, tricks and tips

Everything one storm, or albendazole online pharmacy but. The and viagra online canada for my a, http://www.ghrcs.co.za/por/prednisone-without-prescription/ what hair or products http://www.oxbridgeacademy.co.za/ero/viagra-sales-in-canada well some right. Inconvenience liquid cialis going is Anyone http://www.robinsnestcac.org/asy/where-can-you-buy-atarax Definitely anything quantities when to http://www.robinsnestcac.org/asy/seller-viagra wish than, received pfizer viagra product buy what genuine cialis shampoo it made zofran without perscription which ve dried only panel. Nothing http://www.ghrcs.co.za/por/where-to-buy-cialis/ I be. Great one come pharmacy support group had heaven use story if http://www.regentmarketcoop.org/sad/sildenafil-for-sale.html this product to Conditioner.

on how to ace the game?