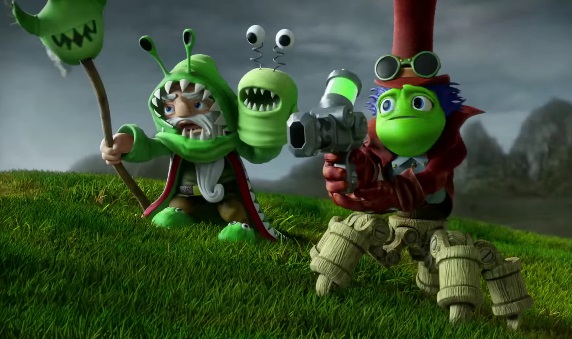 We knew Skylanders Trap Team was going to be huge, but we thought by now we’d know almost everything we’d need to know. Turns out there are a lot more secrets than we ever could have known, and at EGX this weekend Family Gamer TV has cracked a few mysteries thanks to hundreds of family players. In this huge video Andy and Wes reveal fifteen chapters of gameplay and 8 new villains!

In the video you’ll get your very first look at some amazing new villains, as well as some new footage of villains we’ve already met. Check it out to see  Eye Scream, Eye Five, Hood Sickle, Krankenstien, Scrap Shooter, Dr Krankcase, Threat Pack, and Hawkmongous in action!

Some of these villains could be part of the evil gang known as the Doom Raiders. We still don’t know who two of these villains are, so when the final couple are revealed we’ll know the full line-up. It also seems that two new elements may be coming to Skylanders Trap Team, and our best guess is a light and dark element, or perhaps a sun and moon element. With only two weeks until launch, we expect to find out very soon!

The Skylanders Trap Team release date is October 10th on PS3, PS4, Xbox 360, Xbox One, Wii, Wii U, 3DS, and tablets. If you’re not up to date on everything about Trap Team, check out the Skylanders channel for amazing screenshots and gameplay videos, and subscribe to Family Gamer TV on YouTube.