Get a look at the Disney Infinity 2.0 Originals 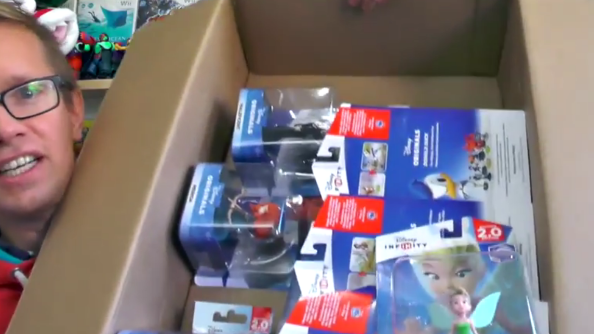 You may think that Disney Infinity 2.0 has been and gone, but you’d be wrong. September’s launch of the game with the Marvel Super Heroes pack was just the start, and we’ve got months of cool new characters to look forward to. The next set to appear will be the Disney Originals – a collection of cool Disney characters from classic cartoons and films. Andy from Family gamer TV has been having a look at what’s to come.

In Andy’s box you can see Stitch, Merida, Aladdin, Beymax, Hiro, Tinkerbell, Maleficent and Donald Duck figures, which are all ready for the Toy Box 2.0. If you already own Disney Infinity 2.0, these figures can jump in alongside your Marvel heroes and start making their own adventures. If you don’t have Disney Infinity 2.0 yet but have the first game, then this is a great place to start. You can download an upgrade from PSN, Xbox Live, or the Nintendo eShop, which turns your Disney Infinity game into the 2.0 version, unlocking all the cool new features. This is much cheaper than buying a starter pack, as the upgrade is only $29.99.

If you’ve wanted to play Disney Infinity 2.0 but don’t like Marvel super heroes, then you can get the Disney Originals pack which will include classic Disney characters like Merida and Stitch instead of the Avengers.

We’ve got stacks more amazing stuff about the game at the Disney Infinity channel. If you loved this video, follow us on Twitter for loads more amazing stories, and subscribe to Family Gamer TV on YouTube.