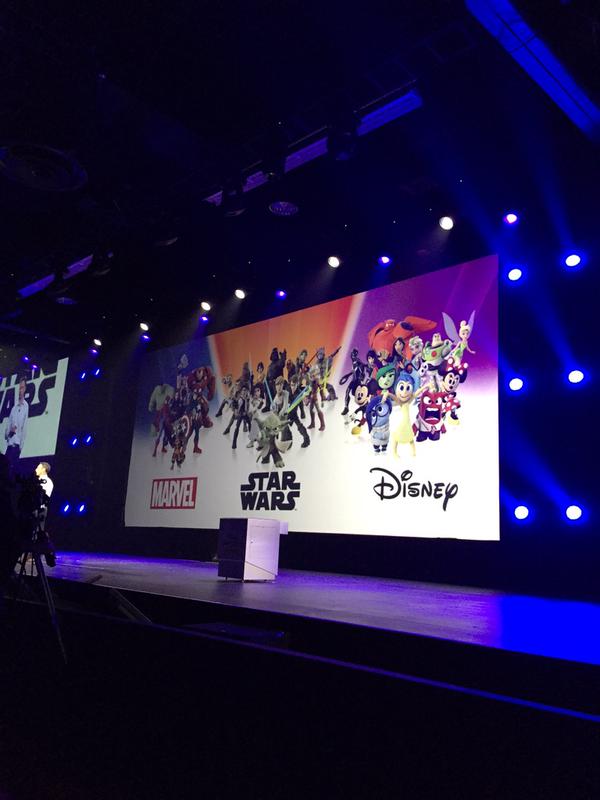 There was a lot of Disney Infinity 3.0 news at D23 this year. Perhaps the Marvel playset was the most unexpected. Rather than focusing on Ant Man or Age of Ultron, Marvel: Battlegrounds instead offers 4 player co-operative play.

You can use all the the existing Marvel characters in it, along with Hulkbuster and Ultron that are releasing in November 2015. It will be released this spring.

The third Star Wars playset, for Episode 7 The Force Awakens was also talked about for the first time. Finn, played by John Boyega and Rey played by Daisy Ridley both had figures revealed.

Other figures included Spot from Good Dinosaur was shown along with a set of 4 power discs. This was expanded upon from the stage, “Inside of the film there are impressive dinosaurs, so we’ll bring 4 Good Dinosaur power discs as mounts for the game.”

Judy and Nick from Zootopia, the upcoming 2016 movie were also revealed to be included in teh game. Finally, the results of the Toy Box Artists selection was announced to be Peter Pan, although he will not be available until 2016.

It was certainly an impressive line-up of news that got the avid crowd excited. It will be interesting to see how Disney Infinity 3.0 fairs in comparison to Lego Dimensions and Skylanders Superchargers at retail this year.