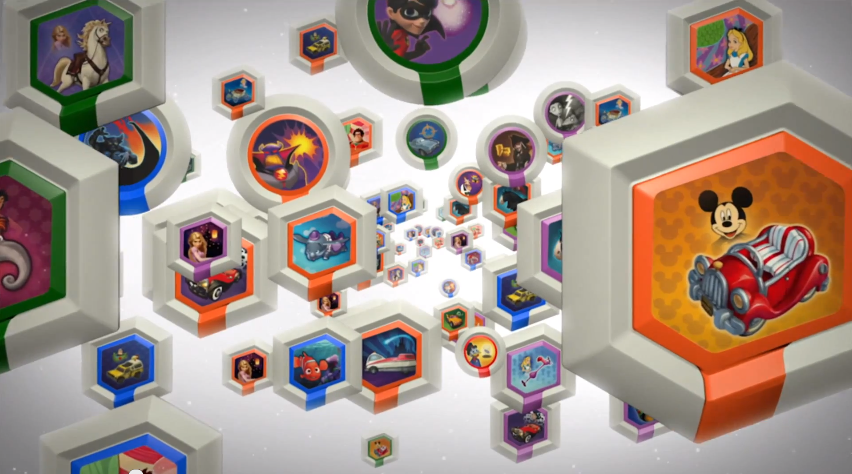 The third wave of Disney Infinity Power Discs are available from today! You can buy them from shops in packs of two right now, and there are 17 new circular and hexagonal discs to collect.

We got to see some of these in Family Gamer TV’s video, but here’s the full list of the new Power Discs, with an explanation of what each one does.

Chernabog’s Strength – A representation of pure evil from Fantasia, you can summon the demonic power of this villain to do 3% more damage

Rapunzel’s Healing – The magic of Rapunzel’s hair does more than make blonde locks continue to grow.  Her golden hair has healing properties that can give a character 40% more health

Violet’s Force Field – The quiet daughter of The Incredibles can not only turn invisible, she can generate a force field that can reduce damage by 3%

Disney Parks Parking Tram – This vehicle can bring back fond memories of a trip to the Disney Parks.  It provides the great comedic value of driving around a parking lot tram, especially when challenging fancy racecars

Calico Helicopter – The cunning and merciless villain from Bolt is always surrounded by cats and its master strategist.  Take control of Dr. Calico’s helicopter which is fully equipped with rockets to rain fire from above

Phillippe – The loyal horse from Beauty and the Beast is the trusty companion and only mode of transportation for Belle and her father Maurice.  The horse is loyal, but has been known to get spooked easily

Tantor – Tantor often seems to be timid and even cowardly.  However, the gentle elephant has a deep bond with his friends and is often inspired to acts of bravery

Wall-E’s Fire Extinguisher – A rare toy inspired by a classic scene from WALL-E, it allows characters to use the propulsion from a fire extinguisher to hover in the air

Buy ‘N’ Large Atmosphere – The Sky Theme becomes a swirling dustbowl filled with empty buildings that are mere husks of their former glory.  The most notable thing in the barren horizon are the numerous Buy ‘N’ Large signs

Angus the Horse – The beautiful black Clydesdale from Brave is fiercely loyal to Merida.  Although he can be stubborn at times, his strong bond to his owner allows him to be coaxed into almost anything

Tri-State Area Terrain – A simple and subtle texture, along with a few gadgets, that is reminiscent of summertime when Phineas and Ferb create their incredible inventions

Danville Sky – Turn the Sky Theme into the backdrop of Phineas and Ferb’s Tri-State Area.  One of their greatest projects, a giant roller coaster, can be seen off in the distance.  In addition, you can spot the iconic building of Doofenshmirtz Evil Incorporated, the lair of Agent P’s nemesis