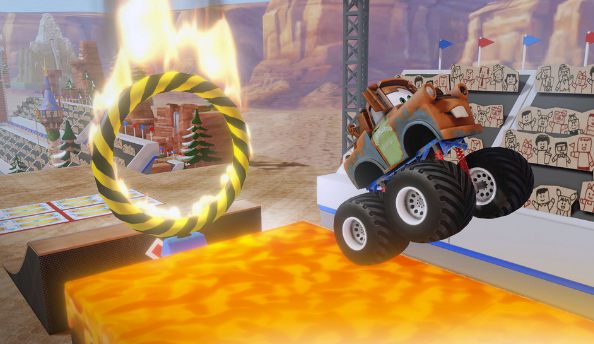 Disney Infinity now has five whole new Toy Boxes. They’re free to download on Wii U, PlayStation 3 and Xbox 360, and include bits and bobs from films like Wreck-It Ralph and Tron.

The new Toy Boxes are the Tron Highway, where you can race a Light Runner and battle enemies on the Grid. Sugar Mania is inspired by the sweet-themed race track from Wreck-It Ralph, and you’ll be able to go for a drive in King Candy’s Royal Racer. Monster Rally is a race track with plenty of off-road action. Cosmic Platformer challenges you and some friends to a crazy obstacle course, whilst It’s a Trap will get your brain in gear solving puzzles in lots of rooms.

You can download new Toy Boxes from the Toy Box selection in Disney Infinity’s main menu. Just check out the Toy Box Share section. You can make your own Toy Box too and submit it to Disney. If Disney like it, they’ll put them on the main page so other people will download them! Just make sure you submit before October 3rd to be in for a chance of being featured.

Disney are planning to make a new Toy Box available every week for Disney Infinity. What kind of Toy Box would you like to see next?