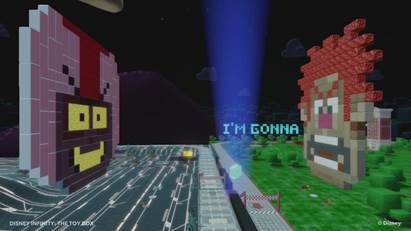 Look out Disney Infinity fans, there’s five new Toy Boxes coming to town. They’re all made by the community; fans of the game just like you! The five are winners of the “Heroes vs Villains” competition Disney held a while back. Watch this video to see them in action.

The five Toy Boxes are all based around a favourite Disney hero facing off against an evil villain. You can play as good or bad in each of them. The five stages are:

Ralph vs. Turbo – Turbo wants to beat Wreck-It Ralph in a race for helping Vanellope. Choose your side!

Mirror Mirror – Who is the fairest (and fastest) one of all? Find out in this obstacle course! First one to the apple wins.

Olympus Coliseum – Based on Kingdom Hearts where villains will battle for trophies. For a greater challenge, travel to the Underworld Arena!

King of the Hill – Control the cannons or run the gauntlet with favorite heroes and villains. Designed for two to four players.

Save the City! – Three missions: save 10 citizens, defeat 10 robots or defuse 10 bombs. Finish all three and save the city!

To download them, hit up the Toy Box option on Disney Infinity’s main menu, select Toy Share, and then search through Disney’s Toy Boxes for the box you’d like to play. And if you’d like to make your own Toy Box, check out Family Gamer TV’s tutorial on how to create awesome things in the Toy Box mode!