Is this how you’ll play Pokémon in the future? 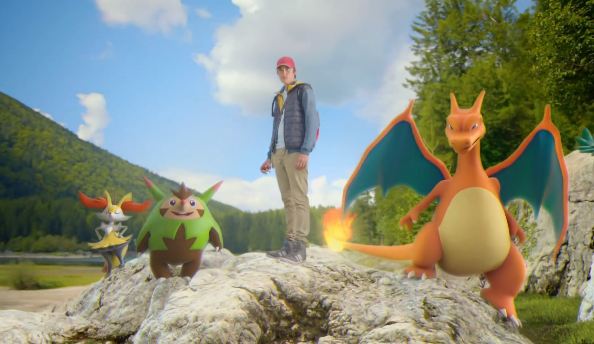 Who hasn’t dreamt about actually being in the Pokémon universe, walking around through the tall grass and battling trainers we come across? Well that reality may be closer than you think! Check out an entirely new way to play Pokémon which uses the Oculus Rift virtual reality goggles and an object called Virtuix Omni in the video below.

Virtuix Omni is basically a high-tech treadmill that you can use with the Oculus Rift, allowing you to virtually walk around in a game as if you were actually in it! When you walk forward on the treadmill, your character will walk forward in the game. It will feel like you’re inside the game too, because when you wear the Oculus Rift goggles, instead of seeing what is in your room, you’ll see the Pokemon world instead. How cool is that? Although the game used in the video is a fan made Pokémon 3D game and isn’t a real game in development with Nintendo, you can easily see how cool it might be to play Pokémon this way in the future!

As you can see in the video Pokémon 3D is a fan made 3D version of the old games Pokémon Gold and Silver, so it looks a bit blocky like Minecraft and doesn’t have the graphics of Pokémon X and Y. The Virtuix Omni is being released in September, but at $499 in America it’s a bit too expensive for us yet. It works by supporting players on a round treadmill with a back harness and a pair of shoes which are hooked up to tracking software. This software allows you to move in any direction through the game, even backwards and to the sides!

Although we won’t be able to try this out any time soon, we are very excited about the possible future of Pokémon gaming. Imagine running through the tall grass to a Pokémon Centre when your team is in bad shape, or trying to avoid the wild Pokémon jumping out at you stopping you in your tracks! And walking through dark caves filled with wild Pokémon would never be the same again! What other parts of the Pokémon games would you most look forward to playing with the Oculus Shift and Virtuix Omni? Let us know below!

Check out all the best Pokémon news on our Pokémon Channel or follow us on Twitter for the most up to date gaming stories!