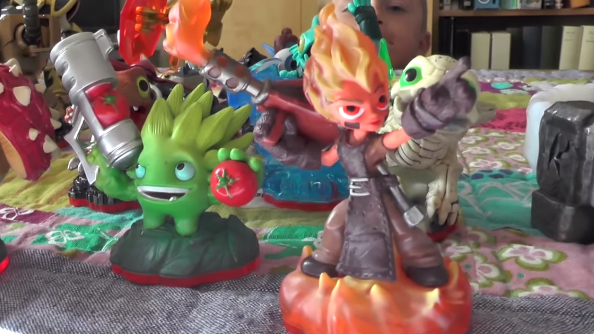 The very coolest thing about Skylanders are the amazing figures that you use to select your characters with. Trap Team makes the selection of heroes and figures even bigger, introducing Trap Masters, Minis, new core Skylanders, and actual trap crystals. The starter pack comes two brand new Skylanders, and Wave 1 of the figures is full of cool new characters we’ve never met before. Andy and his sons from Family Gamer TV have got them all, and you can see what they’re like in this new video.

The starter pack comes with core Skylander Food Fight, Trap Master Snap Shot, a life trap, a water trap, and the brand new Portal of Power which has a little jail cell on to hold your trapped villains in. You can see the PS4 starter pack unboxed in this video, as well as all the other individual Skylander figures that are coming out in this first wave. Take a look at those amazing Trap Masters with their Traptanium weapons. They’ll look amazing in your collection.

The Skylanders Trap Team release date is October 10th on Wii, Wii U, Xbox 360, Xbox One, PS3, PS4, 3DS, and tablets. Keep tuned to BoxMash and Family Gamer TV for the rest of the week as we bring you more amazing gameplay from Trap Team as we run up the road to release!