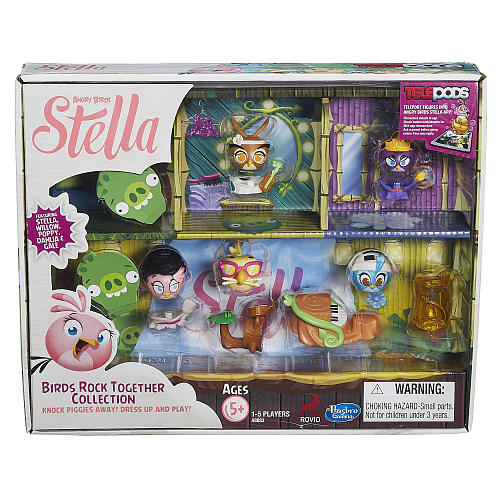 Family Gamer TV have been getting their hands on Angry Birds Stella toys, which are proving to be very different to other Angry Birds toys. They still use the Telepods, but these toys have lots more accessories for a very different play experience. Today, Wes is looking at the Birds Rock Together playset.

The Birds Rock Together collection re-imagines Stella as big rock-n-roll star Elvis, who takes the role of lead singer in a rock band, with Willow on keyboards, Poppy on drums and Dahlia on guitar. There’s no place for little Luca in the band, but the Bad Princess Gale is lurking around, no doubt cooking up some devious scheme. The packaging for the characters also doubles up as a playset, presenting a stage and a number of rooms in which you can roleplay with the characters.

The pack also comes with a set of instruments for your feathered band members to play. There’s no catapult swing, so this set is all about playing the music and not defeating the piggies. How very different!