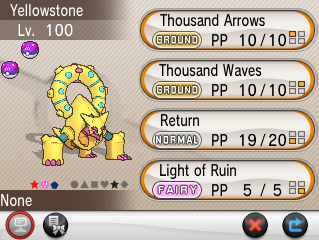 While Nintendo still hasn’t announced any upcoming special events for UK fans of Pokémon X and Y yet, there are still some secrets hidden in the game to keep us excited about the future. Recently hackers have uncovered more hidden material, but rather than a new Pokémon, this time they found three new moves! These moves are Hold Hands, Thousand Arrows, and Thousand Waves. These new moves seem to go with the unreleased Pokémon Volcanion who we showed you in the new Shiny Diancie Gameplay video.

The Hacker Slashmolder used the GBATemp devise to hack into the game and capture a shiny version of the unreleased Pokemon Volcanion. This footage shows the shiny Volcanion having two of the three new attacks.

We have the details for the three new moves here:

Hold Hands
Normal
PP: 40
Hold Hands is similar to the already existing move Helping Hand and is a stat based move. In two player battles, this attack allows the user and an ally to hold hands. This makes them very happy.

Thousand Arrows
Ground
PP: 10
This move is a Ground type move and is a physical attack. Though it may be a ground type move, there is good news as this attack also hits those pesky hard to reach Flying type Pokemon that are in the air and knocks them down to the ground.

Thousand Waves
Ground
PP: 10
Another Ground type move, this move has 100 percent accuracy and is similar to the move Mean Look. According to the Pokédex, “The user attacks with a wave that crawls along the ground”. This move also stops those hit from fleeing from battle.

These new moves and the new Pokémon Volcanion that go with them look pretty awesome, and we can’t wait to try them out. Seeing as Diancie was originally uncovered by a hacker, we reckon these moves and the Pokémon Volcanion will be heading to the Pokémon games eventually, but for now we have to wait for more news. Check back to our Pokémon Channel regularly or follow us on Twitter to keep up to date with the latest and greatest Pokémon gaming news.