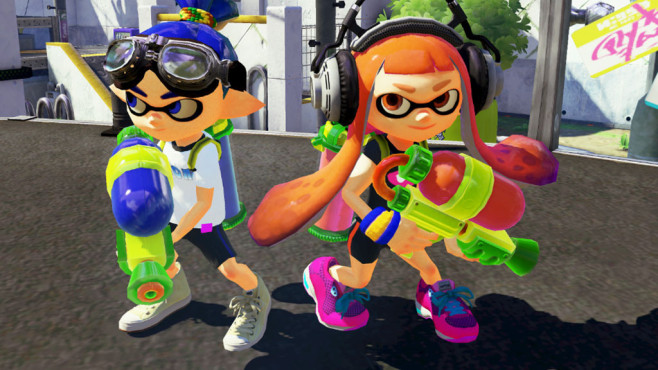 The latest Nintendo Direct unveils more about the weapons and game-play in Splatoon. This not only offers a broader idea of how the game will be delivered at launch but how you can customize the appearance and weapons of your character.

If you’ve not caught it previously, Splatoon combines creative ink-spraying with tactical turf-claiming action. It’s being pitched as the Mario Kart or shooting games and that’s not far from the truth. Like Nintendo’s kart racer, Splatoon can accommodate  players of all ages and skill levels. Each player takes on the role of the Inklings, customizable characters that can transform into squids. After splatting opponents and covering a level with colourful ink, players can transform into squids and swim quickly through their own ink or use it to take cover and hide from enemies.

The video took us through a series of different weapon classes, each with their own play style. Shooters are rapid fire close range weapons, something like a hand gun. Charger weapons take a while to fire but offer greater power at long range distances. Roller weapons are the tanks of Splatoon and can mow down multiple enemies.

Along with the firepower, each of the weapons has different abilities at covering the arena with paint — another tactically important aspect of the game. This is further extended by being able to combine Main Weapons, Sub Weapons and Special Weapons to create you own custom load-outs to suit any type of play.

With the game readying to launch on 29th May and subsequent updates offering more modes and levels, it’s already looking good. There is even a downloadable demo available right now. This will run with timed multi-player slots this weekend to let you try the game for yourself.