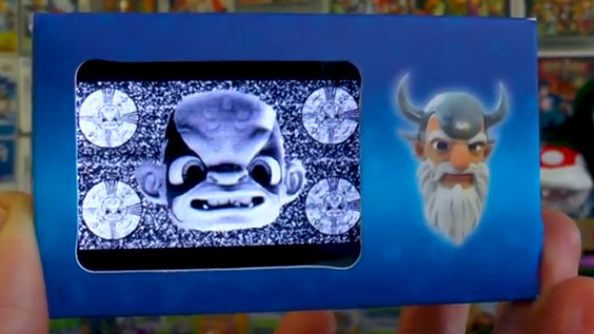 Skylanders 4 will be revealed very soon: in fact journalists from all across the world have been invited to see the game this week! Andy from Family Gamer TV is seeing what Activision have to show off tomorrow, 22nd April! He received a very special invite, which not only told him where to see the game, but also contained a special secret that his son discovered. Take a look!

When Andy’s son held the key against the invite, it turned it on and off. This certainly won’t be an accident, and is probably a secret message hinting at something in the game. Will there be keys that activate special powers in the Skylanders? Perhaps you can switch abilities on and off by holding different weapons to their figures? We’ll certainly find out this week when the game is revealed in London.

But there’s more! A listing for a new Skylanders game was seen on Amazon this week, revealing what could possibly be the real name of the fourth game: Skylanders Trap Team!

Do you think that Trap Team is a real name, or is it a big lie to make us really surprised when we hear what the game is called? And if it is Trap Team, what does that mean? Will we be able to trap new Skylanders in nets, like Pokemon in Pokeballs? Let us know what you think in the comments!