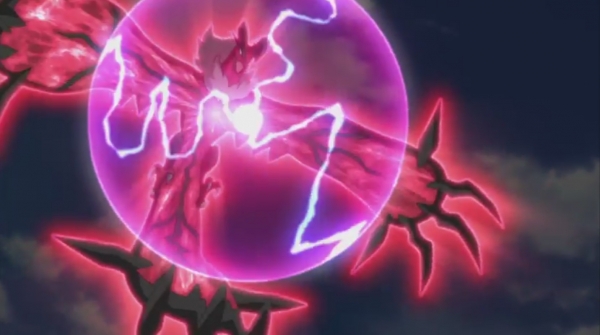 Get ready to grab your Pok?balls and turn your hat backwards because a serious Pok?mon battle is about to go down! That’s right, the second teaser trailer for the film “Pokemon XY: Cocoon of Destruction and Diancie” has been released on the official Pok?mon movie site! Check it out.

This new trailer shows clips from the Japanese version of the movie, and what’s awesome is that we get to see a peek of the fight between the Pokemon X and Y legendaries Xerneas and Yveltal! Although the trailer is in Japanese, it still shows some great footage of what we can expect in the new film. The film’s title itself explains a lot, because the “Cocoon of Destruction” means Yveltal, and it will introduce the new?Pok?mon Diancie. It has also been confirmed that the new film will feature Mega Evolution just like the Pok?mon X and Pok?mon Y 3DS games!

Here is a translation of the voices in the video for you:

Narrator: The latest brand-new work in the series!

Old man: The creature has awakened.

Ash: That’s a Pok?mon of Destruction!

Narrator: This summer, the curtain rises on a forbidden battle in a new world! Pok?mon the Movies’ first XY entry: Cocoon of Destruction and Diancie!

Diancie: I bid you goodbye.

Although a release date has not been confirmed for the UK, this is already shaping up to be one of the best Pok?mon movies yet with one of the fiercest battles! Who do you think will win between?Xerneas and Yveltal?

If you loved this video, follow us on?Twitter?for loads more amazing stories and gameplay footage, and check back here regularly for more?Pok?mon?news!