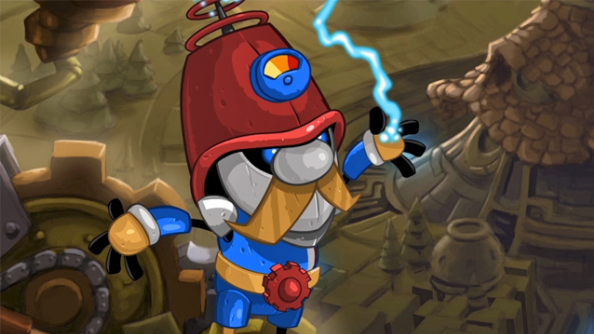 Peggle 2 may be a game mostly about hitting pegs with a ball, but it still has some ace characters to help you on your way. We’ve seen three of the Masters for Peggle 2 already, but now Pop Cap has shown off another two: Gnorman the gnome and Jeffrey the troll. Catch a look at them in the videos below.

Gnorman is a smaller-than-normal gnome, so to stay the right height he lives in a robot gnome. That may seem a bit silly, but it allows him to do something very special to the ball in Peggle 2: he can electrify it with lightning! With the ball electrified, each peg it hits will blast out electricity to two other pegs, making your score soar. Pretty cool, yeah?

If you don’t fancy Gnorman, then there’s always Jeffrey. He’s a real dude, and a troll who loves bowling. His big boulder can bowl through pegs and crush them, letting you gain massive points when your multiplier is high.

Pop Cap has also released new videos for the previously revealed Peggle 2 Masters, Bjorn, Luna, and Berg. Take a look at their special abilities in these videos!

The Peggle 2 release date is December 9th on Xbox One, and will feature 120 levels. Peggle 2 will release on Xbox 360 as well, but not until sometime next year.