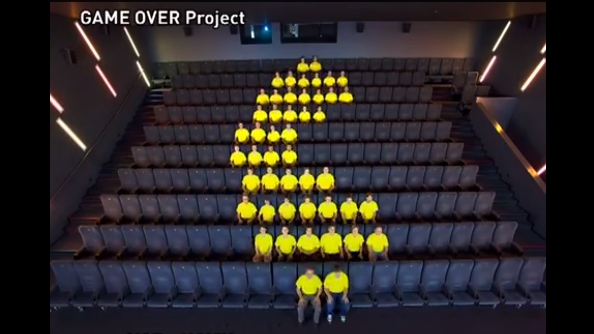 Do you love retro games? We’re talking really old classics like PAC-MAN, Tetris, and Space Invaders. If you like those games, then you’ll love these videos, which recreate some classics using nothing but some chairs and people in different colour t-shirts!

This PAC-MAN video was shot in a cinema, so there was plenty of seats to let everyone sit in the right positions. You can see how people in blue make the walls of the maze, and the person in yellow is PAC-MAN, eating up all the little white pills and keeping away from the ghosts. If you’ve never played PAC-MAN, you could watch this video to get a better understanding.

Next up is Tetris! We love how the man who makes these videos – a Swiss guy called Guillaume Reymond – sings the theme tune whilst his actors huddle together in the block shapes and ‘fall’ down the cinema seats. If you’ve not played Tetris, check out this video.

Pole Position was a driving game, and you can see how they make the track by having a line of people each side of the cinema, who bend a curve to make the corners of the race track appear. Pretty cool! Check out the original Pole Position too.

Last up is Pong, which was the first videogame ever made (all the way back in 1972!). It’s a tennis game, where you bat the ball back and forward to your partner using a little paddle. It’s kind of like Wii Sports tennis, but with much simpler graphics!

The team that make these videos are called NOTsoNOISY, and they have lots of other cool videos you can watch on YouTube.