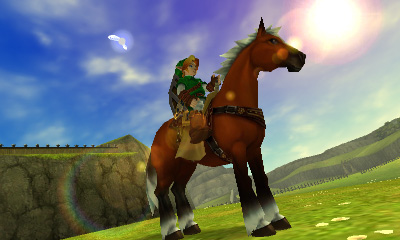 Hyrule Warriors is out in the wild now, so you may have been playing it on your Wii U for a few days now. If you’ve been playing as Link and missing his trusty horse Epona, then don’t worry: she’s galloping into the game soon as part of a new DLC pack.

On October 16th the Master Quest Pack will be available from the eShop, and will bring some interesting new items to Hyrule Warriors. We don’t have all the details yet, but we do know that Epona will be part of the pack.

Zelda producer Eiji Aonuma has already spoken out about what it’s like to play with Epona: “I already had a chance to try out Epona in the game. By riding Epona, I was able to blow heards of enemies away and gallop swiftly through the fields, and I had a lot of fun trying out this re-imagined version of her in Hyrule Warriors.

“In the Zelda series, players never had a chance to tackle bosses by galloping around them with Epona like in Hyrule Warriors, so I hope fans will enjoy playing as Zelda characters in a game with a different type of action than you typically find in the original series.”

Sounds exciting! The pack will also come with new costumes and scenarios, but we’ll have to wait until closer to release to find out what these are!