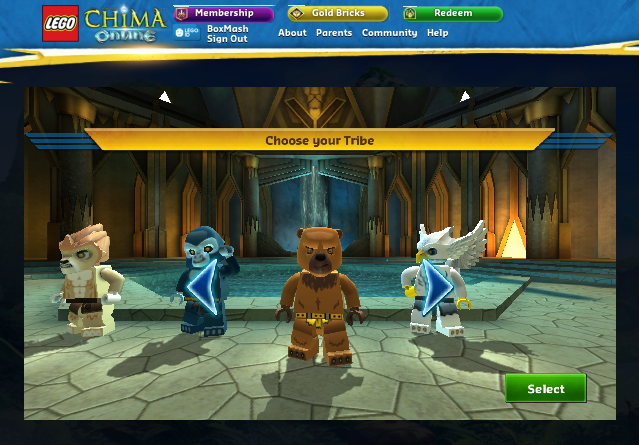 Hello and welcome to our first Legends of CHIMA Online Game Diary! Every Friday for the next few weeks we’ll be giving you an inside look at the adventures that take place in the online world of Chima.

This week we’re looking at the beginning of the game, how to set up your character and get through the first few levels. Don’t know much about Legends of CHIMA? Then check out the trailer below, or head over to our App of the day where we looked at Legends of Chima back in February.

Starting any new game is really exciting, and this game makes it super easy for anyone to join. All you have to do is either download the app for iPad or iPhone, or head to the website to sign up. Then you chose a username, fill in a password, and give your parent’s email so that they can let you play. This is a cool way to get your family involved, and you never know, you might even convince them to join you in the game! If you are playing on your laptop or computer, you will also be asked to download the Unity plug in, but this is pretty easy to do as you can just click on the link on the webpage, and follow the instructions. It should only take a minute or two, and now you are all ready to begin your journey in the world of CHIMA! Now it’s time to begin… 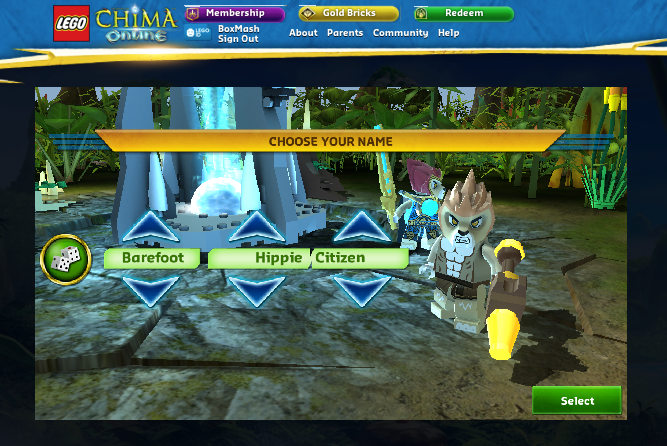 I was pretty excited to begin my adventure in LEGO Legends of Chima, but didn’t really know what to expect. In the world of Chima eight different animal tribes are at war to try to control the worlds power, which is called Chi. This Chi is like a superpower: it can be used to release a big blue ball of energy that destroys any foes in your path. Once I logged in, I was shown four awesome tribe commanders to chose from: an eagle, a bear, a gorilla, or a lion. These commanders are all part of the ‘good guys’ fighting against the evil crocodiles who are trying to take over Chima. I decided to go for the lion. Once I’d chosen my team member I got to customize what they look like, changing their heads, body, and legs to whatever colour and style I liked best, which was really cool. I decided to go for a really light brown. I didn’t worry about it too much though, because I knew that I’d be changing my character’s armour loads as I got further into the game. 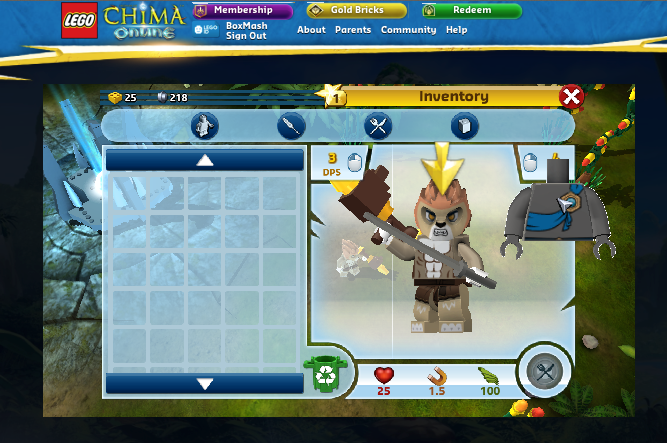 And then it was time to get into the game! I appeared in my own outpost, where I was introduced to the world of Chima through easy tasks. I told exactly what to do to learn how to use my equipment, build an outpost, attack foes, and armour myself up. This part of the game was super fun, and I was quickly flung into the world with other players who were also learning how to get to grips with the commands, so I could quickly make friends and add them to my connections. It’s so easy to make friends as their pictures appear on the screen and you just have to click on them and then click ‘add’ to send them a request to be part of your team. Don’t be put out if people don’t accept, everyone is new to the game at this stage, and most people I ran into were busy figuring out what they were doing, just like me! 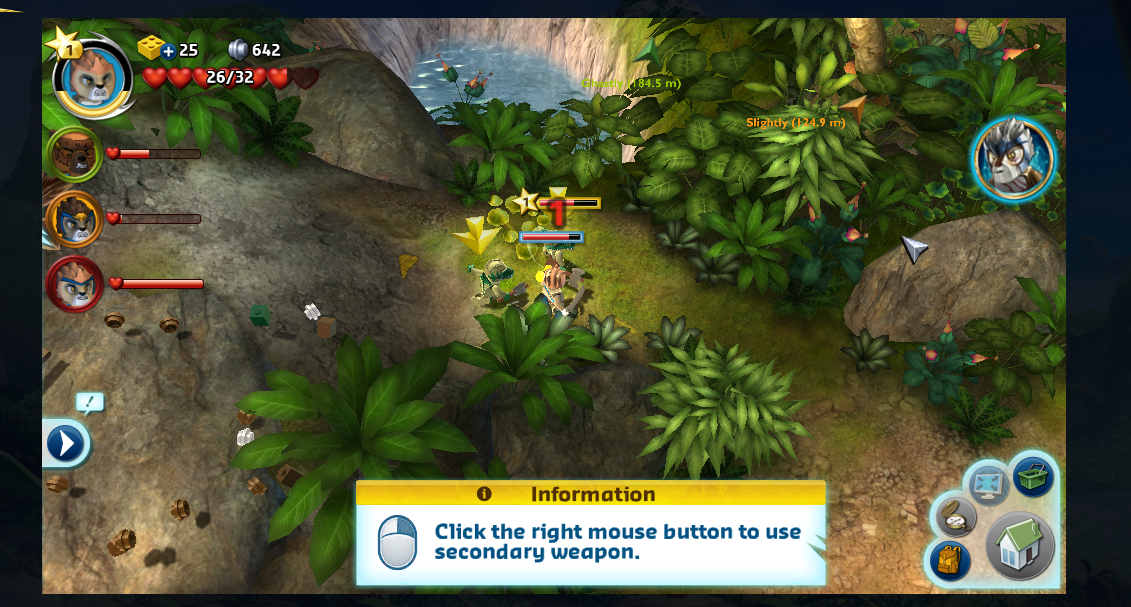 One of the coolest things is the big portals I had to use to get around. Clicking on them brings up this massive map, which means that there’s loads of awesome areas to explore coming up in the game. it confused me a bit at first, but all you have to do is click on where the arrows appear to go to that place. It’s that easy, and poof! I was in a different part of the game! 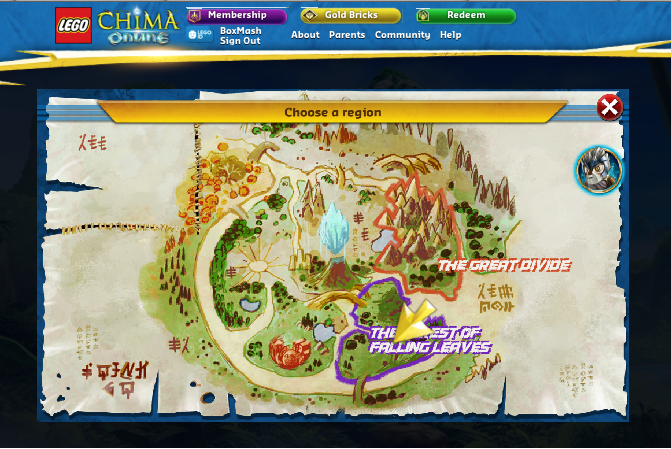 The game is full of evil crafty Crocs who have stolen things or are taking over areas, and it is my job (and yours) to take them on. It was a bit manic at first battling them, as I had to try to click on them to attack them, and when there was loads of them moving about the place it was hard to land a hit! But I soon got used to it. It’s cool because your character doesn’t just have one weapon, they have two, so you can alternate between them in battles. Learning to release my CHI was one of my favourite parts of the first level, the massive blue ball that explodes from your character is really awesome, and kills any foes in your path instantly! Although you have certain quests you need to do to get rewards, I made sure to spend plenty of time exploring the areas around to find loads of cool objects and bricks. As I’ve played lots of LEGO console games before it was easy to get the hang of it quickly as I have to destroy trees and objects around me  to get studs, which are like coins in the LEGO world. 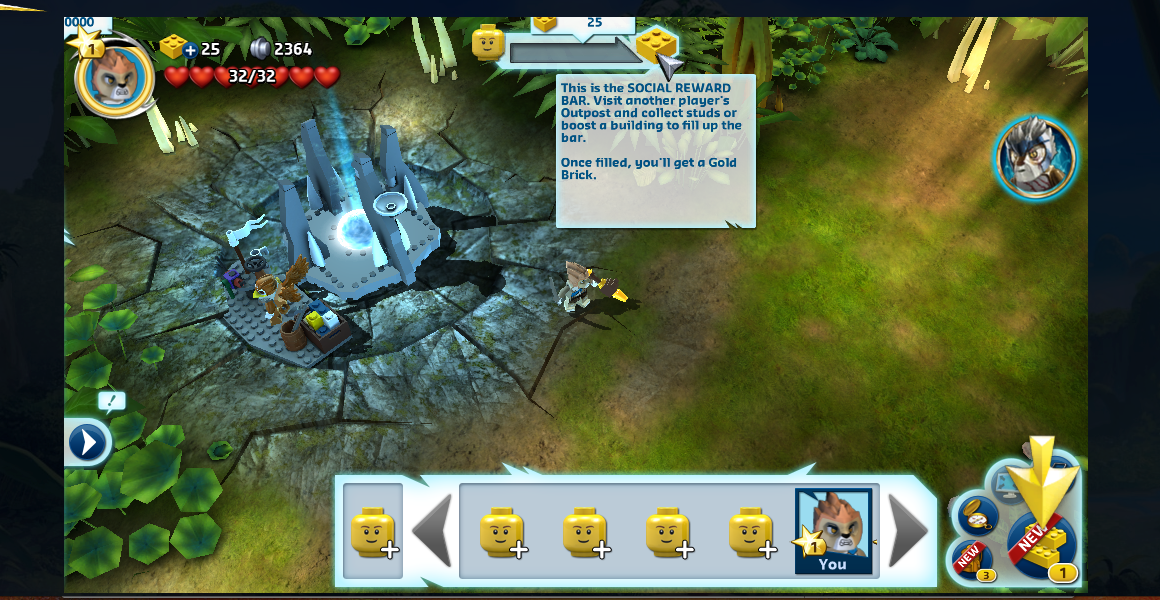 One of the funniest parts of the first level of the game is choosing your character’s name. There’s an awesome random name generator, so I played around for ages to see how many funny names I could generate! There were some really good ones like ‘Barefoot Hippie Citizen’ and ‘Fuzzy Scarab Knight’ but in the end I settled on ‘Looney Toady Pigeon’. 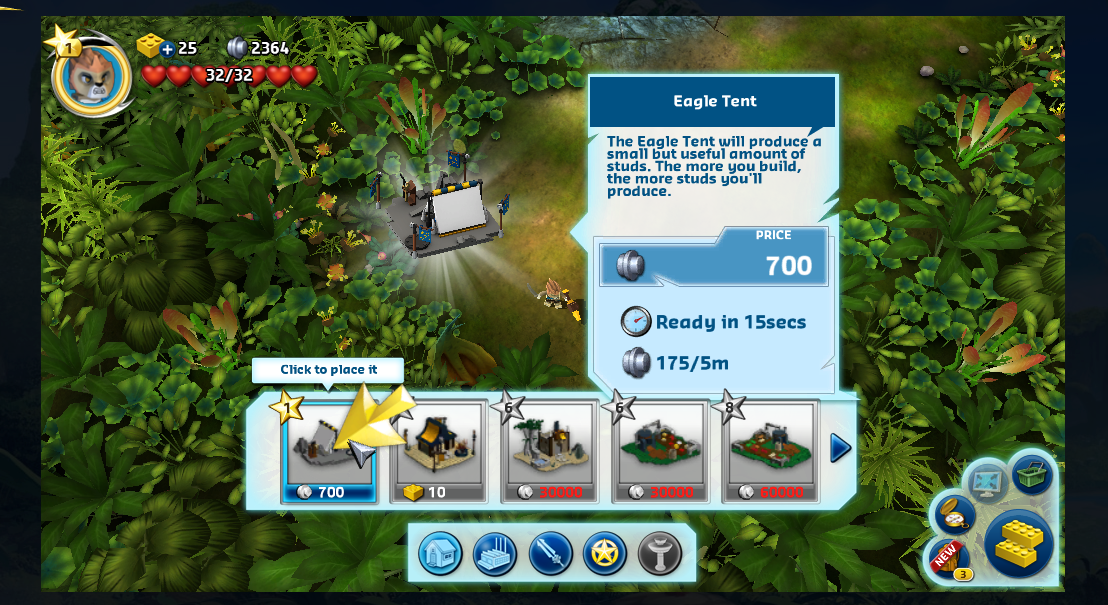 A big part of the first few levels is building up your outpost, which is pretty fun. It’s basically an area that’s just for my character, where I can build houses and blacksmiths, and invite friends I make in the game over. There are loads of cool houses and stuff to choose from, but unfortunately at the beginning I only had one choice. Houses help with that though because they create studs even when I’m not around, so I can just collect them when they’re ready, and can save them up to buy better houses and objects. One of the coolest things you can do in your outpost is build a blacksmith, which let’s you craft your own weapons! The underground mines hold loads of cool bricks, and I had to go there to collect them. I collected loads whilst I was down there – they just kept on reappearing so I thought, why not! I never know when I might need them. Then I was able to make my own weapons. I just clicked on the shape brick I needed and dragged it to the brick shaped hole it matched. Like most things in this game, a timer appeared and I had to wait for my weapon to be made, but it’s pretty cool to make my own stuff. 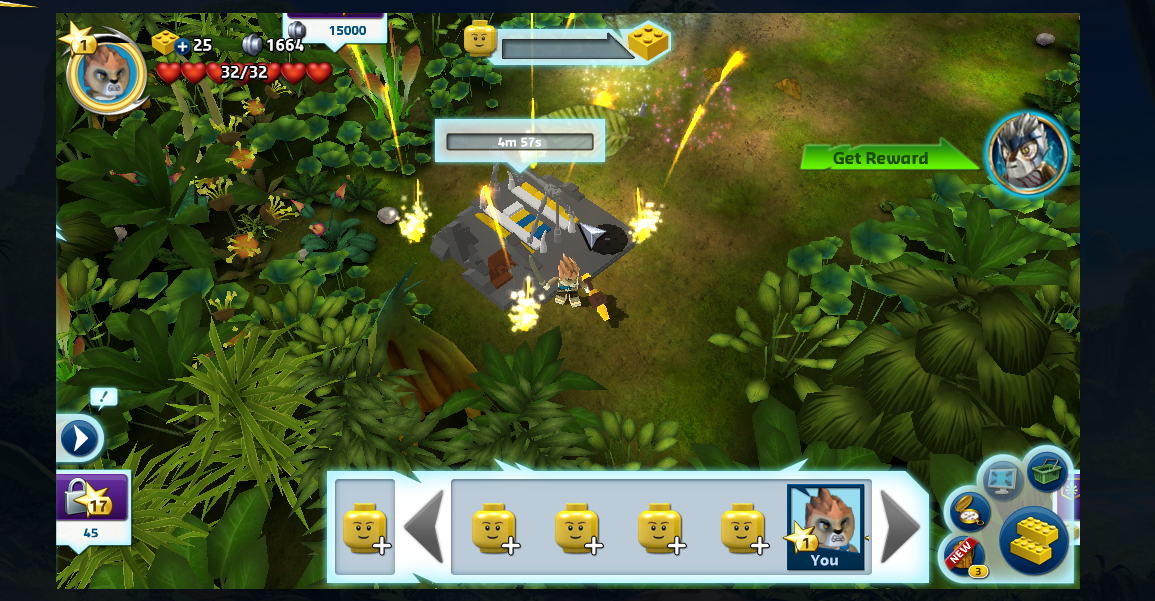 Although the game is completely free, it often reminded me that I could become a member if I wanted to give myself even more awesome stuff, like more studs, houses and powers. I haven’t signed up yet though, I want to see how I go on my own for the first while! I’ve managed to reach level 4 so far, and a cool thing is that every level I went up I got a gold brick. What will happen next? Probably a lot more crocodiles and a lot more fighting, but I’m ready to take it on! 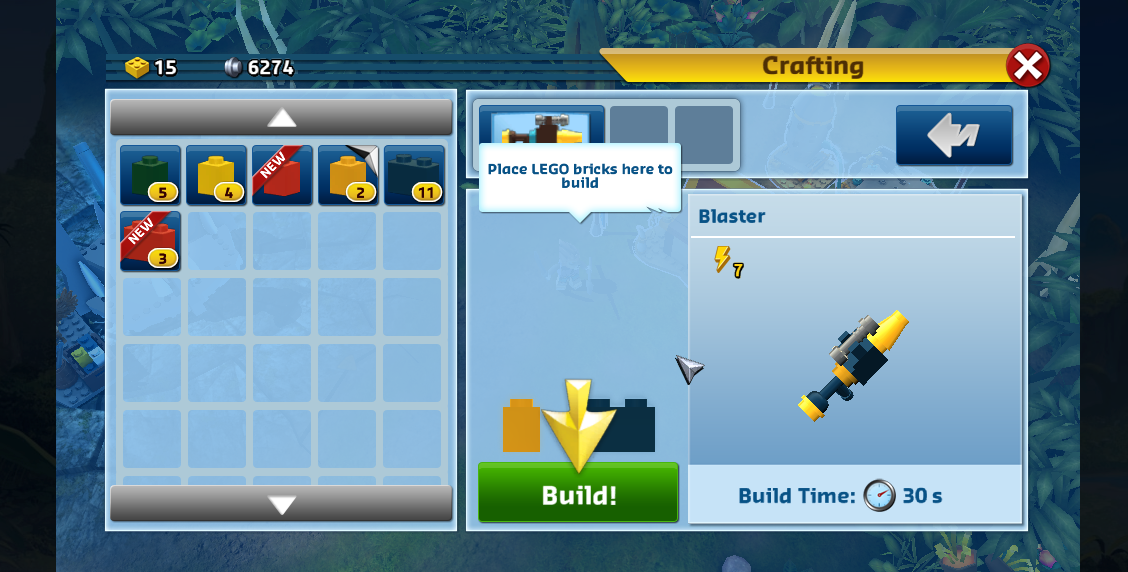 #1. Worried about not knowing what to do? Don’t! Just follow the yellow arrows, they will show you what to click and where to go. They even tell you how much distance you have to go before you get to your destination.

#2. Make sure you have your sound up, as characters will talk to you to tell you what to do next.

#3. Don’t forget to explore everywhere, even once you’ve completed your task in that area as smashing objects and opening chests will give you loads of awesome new stuff, even armour and weapons! There are also loads of cool areas to explore, such as caves and hidden areas.

#4. Houses create studs, even when you’re not around, so remember to collect them when they’re ready.

#5. In your inventory, you can easily click a button that equips you with all your best gear straight away! Handy huh? Now look who’s ready for battle!

#6. If you are using the website, an easier way to move rather than just clicking the ground is to hold down your mouse and move it and your character will move wherever you point!

#7. Remember to collect your studs after you break an object, but be quick, because they disappear! You can collect studs just by walking near them, but with items you need to actually click on them to collect them.

#8. Always collect every item: some of them may look like tiny useless bricks but they are actually awesome items that enable you to make weapons!

#9. Don’t worry about losing in battle. If you die, you just end up back at your last check point. If you do want to escape a battle, just click the house button in the lower right corner of your screen at any time to return to your outpost to refill your HP bar.

#10. Try to make as many friends as possible! This makes playing way more fun, as you can take on challenges together. You’ve also got a neat social reward bar, which will give you rewards for visiting other people’s outposts. Make sure you remember to get your parents or guardian to unlock your chat though, or you won’t be able to say anything to them.

Ready to join in the fun? Head to the website to play the game online, or download the app on both iPhone and iPad from the App store, and make sure to add us as a friend. Don’t forget to share some of your favourite stories from the Legends of CHIMA Online by tweeting us.