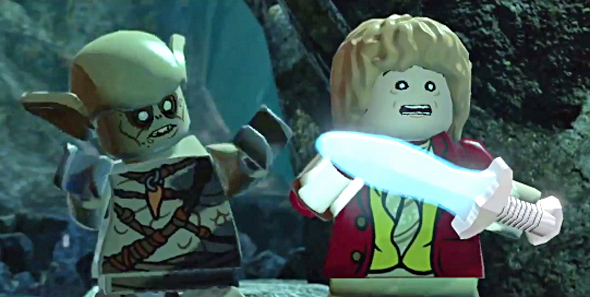 Start packing your bags for an unexpected journey there and back again: LEGO The Hobbit will be released on April 11th. Coming to Wii U, 3DS, PS3, PS4, Xbox 360, Xbox One and PC, there’s a place for everyone to help the dwarves get back their stolen gold.

Website VG247 got to chat to LEGO The Hobbit?associate producer Tim Wileman, and he explained about some of the new features in the game. In this video above, you can see some of the new building mini-games. You don’t just hold down a button to build things anymore. For some things, you actually have to build the design using individual bricks and put them together yourself. It looks brilliant.

In this second video you can see lots of footage of the dwarves and Gandalf fighting the Goblin King and his minions under the Misty Mountains. Dwarves can help each other out to solve puzzles, and some Lego bricks can only be shattered by using dwarven axes. There are also special blue bricks than only magic can destroy, so you’ll have to play as Gandalf to deal with them.

The LEGO The Hobbit release date is April 11th. The game will be set during the story of the first two films: An Unexpected Journey and The Desolation of Smaug.