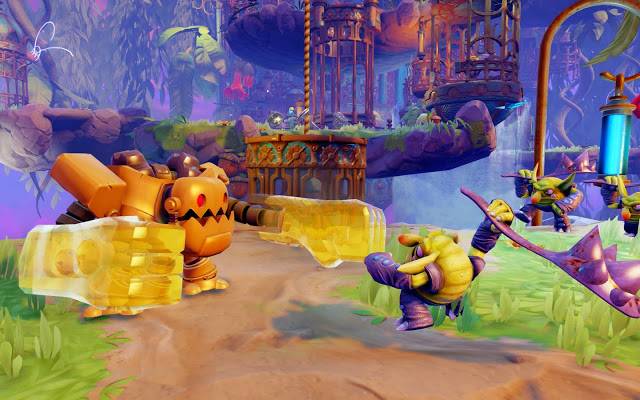 It’s time to get your first real look at Skylanders Trap Team, one of the most exciting games of this year. Andy from Family Gamer TV has been to see the game, and here you can see some action from the Secret Sewers of Supreme Stink level, as well as some of the brilliant villains you can play as after defeating and capturing them.

Here we get to see a new Trap Master Skylander in action: Jawbreaker. He’s got big fists of Traptanium and can be boosted to make his attacks much stronger. But he’s not on his own; in the Traps you can hold different villains, which when slotted into the Portal of Power replace your Skylander. You can only play as a villain for a short time though, because they’re really powerful. When they run out of time, they’ll be sucked back into the trap and replaced with your Skylander.

Not every villain is a strong attacker though, others are more support focused. Broccoli Guy can place down a rune that heals, so you can swap from your Skylander to Broccoli Guy, throw down a heal, and then swap back to heal your Skylander in the middle of a crazy battle. Other villains in action in this video are Wolfgang (a werewolf who plays a harp guitar), Painyatta (a pinyata who can throw up candy), and Buzzer Beak (a bird with a helicopter on his head). They all have unique abilities, and also special missions that power them up when you complete them.

Every Skylanders game has a ‘Hub World’ where you go between missions, and the Skylanders Academy is where you’ll be hanging out in Skylanders Trap Team. Here you can investigate the Villain Vault where you can manage and equip the villains you have trapped. You can also level up your characters with Persephone, and also play cool minigames like Skystones Smash.

The Skylanders Trap Team release date is October 10th, and will be released on PlayStation 3, PlayStation 4, Xbox 360, Xbox One, Wii, and Wii U with a starter pack.