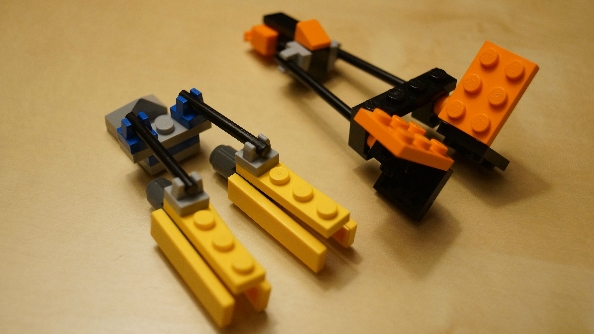 If you’ve got a good collection of LEGO, then this is the story for you. With just a handful of different pieces, you can easily make some amazing starships from the Star Wars films. You’re just a few snaps away from having a fleet of Tie Fighters ready to go, or a Pod Race set up to speed with.

Tie Fighters are the classic ships of the Empire. They defend the Death Star from rebel attacks and are used for swift and shocking raids on enemy planets, crushing all resistance to the Emperor’s rule. Even Darth Vader himself has a Tie Fighter. By following the steps in these pictures, you can easily make a Tie Fighter yourself.

By using the pieces in these pictures, you can put together Slave I, the cool ship that bounty hunter Boba Fett flies around the galaxy as he hunts for his next target.

You can build an AT-ST with these bits, also known as a chicken walker! You may remember them in action in Return of the Jedi, as the Storm Troopers tried to fight the Ewoks on Endor with them.

Sandcrawlers are massive vehicles that the Jawas travel around in, filled with junk they try and sell at each city they stop at. This Sandcrawler may be tiny compared to the real thing, but it’s just as cool.

If you’re looking for something from the prequel trilogy, then this Naboo starfighter will be just up your street. You could build a fleet of them and help protect Amidala from the evil Trade Federation!

Obi-Wan, Qui-Gon, and Jar Jar escaped from the Gungan underwater city using this submarine. If you build it from LEGO, you can recreate the scenes where they get attacked by massive fish monsters.

If you need a ship with lots of firepower (how about twelve turbolasers and twelve laser cannons?) then try a Nebulon-B Frigate. Easy to build, and they look amazing when they’re finished.

If you’ve got a need for speed, then a pod racer is what you’re after. These pictures show you how to build both Anakin Skywalker’s and Sebulba’s pod racers, so you can get them to race against each other in exciting laps!

If you build any of these Star Wars ships, why not take a photo of them and send them to us in a comment on Twitter? Just hit the button below!