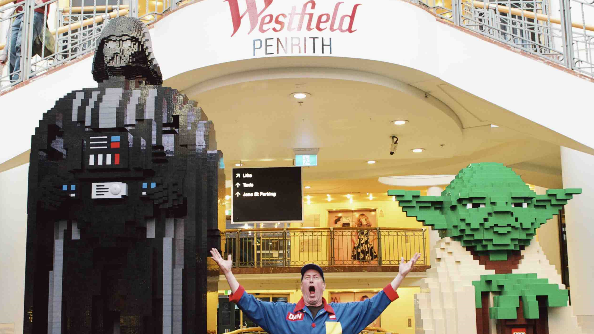 May 4th was Star Wars Day (May the 4th be with you!) and to celebrate, some LEGO fans in Sydney, Australia came together to try and build a massive LEGO Darth Vader. The result is so huge it’s broken a world record!

The four-meter tall Darth Vader is made from 250,000 bricks. It was built by LEGO Master Builder Dan Steininger, who flew from LA in America to Australia to do the build.

“Usually models of this size would take two Master Builders more than three days to complete. With this being the first time a Darth Vader model of this size has ever been built with LEGO bricks, we needed help from fans of all ages.” said Dan.

May the 4th be with you! Dan hangs out with Darth and Yoda.

Dan got the help he needed from hundreds of Star Wars fans who came to Westfield shopping centre in Penrith to build the massive Darth. “It was so rewarding to see more than a thousand Aussies come together, dress up, play and help build these iconic Star Wars characters – we certainly couldn’t have finished the giant models without them!”

Not only did they build the towering Darth Vader, but they also had time to make an awesome, 2 meter tall Yoda, too!

Looking for some other cool LEGO models? Try looking at our LEGO builds pages.