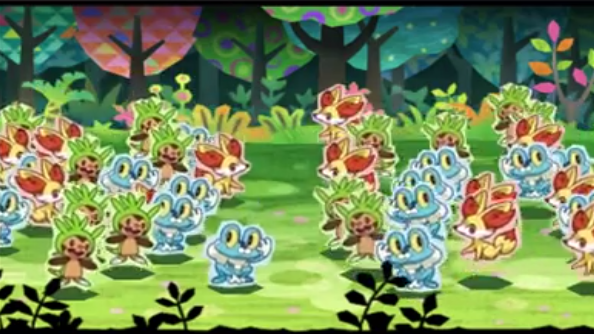 The free Pokémon game that we discovered is coming to Japan this week has been shown off by Nintendo in a new trailer, which reveals a very different kind of Pokémon game than we’re used to. With it’s 2D art, it feels a lot like Nintendo’s Paper Mario games, and looks just as fun!

In The Band of Thieves & 1000 Pokémon, you collect Pokémon through StreetPass instead of in battle. The more StreetPass captures you get, the bigger the army you can use against the Band of Thieves. The game is being given away free in celebration of the new film Diancie and the Cocoon of Destruction, and if Japanese cinema-goers turn on StreetPass when they go to see the film, they’ll also get a special gift from Nintendo.

There’s still no word if the game is coming to the UK, Europe, or USA, but keep your eyes on our Pokémon channel and we’ll let you know as soon as any announcements are made.