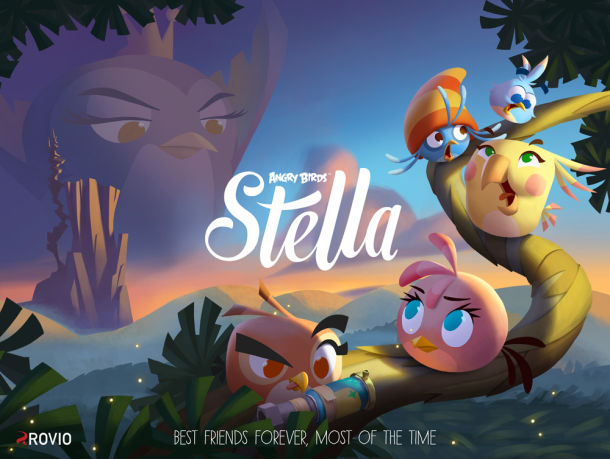 It’s a big year for Angry Birds, with Angry Birds Transformers zooming on its way to phones and tablets, and Angry Birds Stella following soon after. Angry Birds Stella looks like it will be a more character-based game (perhaps a RPG?) with lots of great new birds. Here to guide you through the new character trailer and show off the cool new toys is Wes from Family Gamer TV in this video.

In Angry Birds Stella a group of plucky birds will have to team up to defeat Queen Gale and her army of evil pigs. To get really into the action you can use the telepods technology to transport your own Angry Birds figures into the game world. What figures will be available though?

Collection – $19.99
The Birds Rock Together Collection includes all 5 bird figures to launch at the cardboard piggies. Just launch one of your birds at the included piggy with the launcher. The first player to knock the last piggy down wi

Angry Birds Stella Telepods Piggy Palace Playset Game – $19.99
Knock the pesky piggies away to get in and play with the Piggy Palace Playset Game! Just put your piggy in his perch in the palace, and launch one of your birds at the included piggy with the launcher. The palace doors pop open when the pig falls from his perch, and then you can move in with all your fun accessories.

The Angry Birds Stella release date is later this year on phones and tablets. For more great Angry Birds Stella videos take a look at our Angry Birds stories. If you loved this video, follow us on Twitter for loads more amazing stories, and subscribe to Family Gamer TV on YouTube.