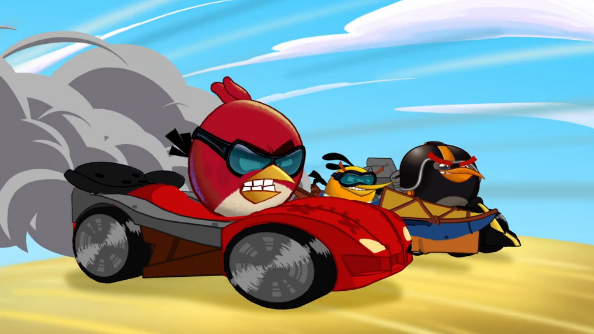 It looks like your toy collection may grow soon thanks to Angry Birds. The new game, Angry Birds Go!, will use toys as part of the game, just like Skylanders and Disney Infinity. With a special trophy stand, you’ll be able to teleport your toy Angry Bird racers into the game. The guys at Family Gamer TV have had some racers to play with, so let’s have a look how they got on in this video.

There will be five different packs available for when Angry Birds Go! is released on iPhone, iPad, iPod Touch, and Android. The box Family Gamer TV are looking at today comes with two cars, one driven by Bubbles the orange bird, and another driven by a pig with a mustache and fancy hat! There are two targets included too so you can have fun with the toys even without the game turned on. Also included is a telepod trophy, so you can make your racers appear in the game.

If you’re all a bit confused, it might be because you’ve not heard of Angry Birds Go! before. If you need to catch up, we’ve got the trailer and all the info on our first Angry Birds Go! story.

The Angry Birds Go! release date is December 11th on iPad, iPhone, iPod Touch and Android phones and tablets. You can download the App for free, and then just buy as many racer toys as you’d like to get up to speed in the game.