10 Awesome Mario Videos to Inspire You 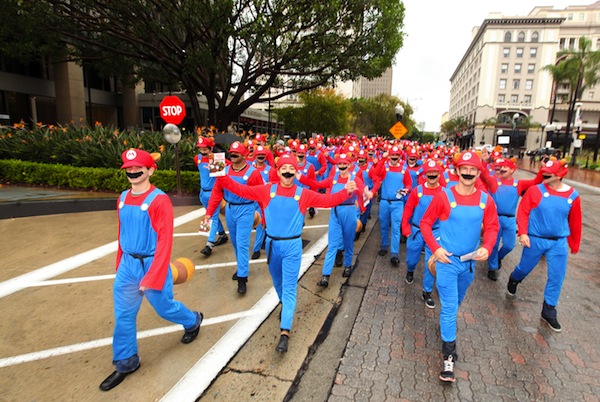 Everyone loves Mario. One of the oldest and most awesome of all of the Nintendos characters, Mario could be said to be the most famous character in video game history. Mario is Nintendo’s official mascot, which makes him kind of a big deal. He is so successful that he has appeared in over 200 games, with games featuring him having sold so much that the Mario franchise is officially the biggest and best selling game franchise of all time! What makes Mario so cool though is he’s just a regular guy, an Italian plumber, who fearlessly takes on the challenge of saving Princess Peach every time. Inspiring stuff!

Mario has recently been the leading star in another quest, this time a campaign to get active with McDonalds! The Run, Jump and Power-Up with McDonalds and Super Mario campaign is all about inspiring you to get active using some of Super Mario’s moves, and the Happy Meal toys come complete with active tasks set out by Mario and friends. With Mario leaving McDonalds at the end of this month, here at BoxMash we thought this is the perfect time to show you some awesome videos of how people have made Mario come to life, so that you can continue to be inspired to get active with Mario! From Mario theatre to real life Mario Kart, and drawing Mario to making Mario Cakes, we’ve got you covered. Check out the list below!

Watch Mario take on a level of Super Mario, but this time all in LEGO! Yes that’s right, if you look at this video closely enough you’ll realise the whole level is made out of basic LEGO pieces, including Mario himself, which means you probably have the tools to make this one yourself right at home. Looking for more cool LEGO videos? Check out the maker MichaelHickox‘s YouTube channel where you can find other Super Mario levels and more!

Ever wanted a Mario cake for your birthday, or wondered exactly how you might make an edible Super Mario? Then you’re in luck, because in this video by british sugar artist Michelle Wibowo you get to see the creative process behind crafting the perfect edible Mario cake. All he uses is lots and lots of sponge cake, icing and colour to make a real life Mario! After watching all that yummy cake making, we bet you’re inspired you to make your own Mario cake at home, so check out this cool recipe we found for a Mario and Yoshie Birthday Cake from cakesbakesandcookies.com! If you do make your own, be sure to send us a picture via our twitter page!

Don’t be fooled, this isn’t just any old how to draw Mario video, in fact, this is perhaps the most awesome how to draw Mario video of all time. Why, you ask? Well, in this video you get to see Shigeru Miyamoto, the creator of the whole of Mario and some of Nintendo’s most awesome video games including Donkey Kong and The Legend of Zelda, showing you how to draw Mario. That’s right, the person who is probably the first and last port of call for knowing the most about Mario shows you just how it’s done. Watch how he draws his own iconic Mario so you copy and try out your own version of the italian hero!

Ever wanted to see a stage play version of Super Mario? Well now you can, sort of. In this video you can see Godly Team Cosplay presenting their own version of Super Mario Bros. in a special performance for a competition in America. If you ever wanted to see who would win if Mario and Lugi battled in hand to hand combat, or dreamed of Mario singing ‘Never Gonna Give You Up’ for Princess Peaches, this video is for you! Think you can do better? Why not try out your own Mario theatre at home with your friends!

It’s time to try out those Mario moves in this cool video by Warialasky that shows that the levels of Super Mario aren’t so far from our lives and can come to life right in front of your eyes. Watch as Mario and Luigi take on their newest level: Our World! Mario and Luigi do what they do best in this video, as they free run through scenes from everyday life, using the world around them to propel themselves forward and do some awesome tricks. They jump on mushrooms, collect coins, twirl and backflip their way through obstacles, disappear down pipes, and jump their way through our world, even climbing on buildings and leaping across roofs. If this video inspires you to get active, remember the people in the video are professionals so make sure not to try anything dangerous at home.

In this really awesome time lapse, Artist Chris Carlson makes Mario come to life in a completely different way to the other videos. Using just some chalk and rulers, Chris builds up an awesome 3D pixelated image of Mario on some plain floorspace. Want to create your own 3D Mario? Just get some paper, chalk or crayons and rulers, and pause the video every few seconds to see all his steps so you can copy him to make one for yourself. This video got you hungry for some more awesome 3D game art? Then check out Chris Carlson’s website or this Space Invaders 3D Chalk Art Project.

Ever wondered what a real life Mario Kart racing track would be like? In this video by Rocketjump, you no longer have to imagine as four real life bumper kart racers get ready to get set and go! Taking on the tools and rules of Mario Kart, watch as the racers zoom around this real indoor racing track. Don’t worry all your favourite items make an appearance, and with giant red shells knocking out rivals to magical mushroom power ups helping them zoom past their opponents, this video is one awesome real life Mario adventure.

Ever seen Mario dance? No? Well watch this video to shake out some moves with your favourite plumber! This video actually features an official real life Mario, as it is the end credit footage from one of the really old Super Mario Brothers Super TV Shows. In it you can see the official Mario dance: ‘Do the Mario!’ where Mario walks you through the steps of the dance whilst doing it himself. You never know, you might like it so much that you even give it a go yourself!

We’ve all seen lots of videos of people playing the Mario theme song on instruments, which is pretty cool and inspiring to help you power through those music lessons. However this video might just top all those you’ve already seen, as in it 23 year old Hikakin uses one instrument that we all have to make his own awesome Mario music: his voice! By using his voice to create different sounds, Hikakin beatboxes the entire Mario tune before adding some funky additions of his own. It’s amazing what you can create with just your voice and a little practise!

This video is awesome because it shows what a group of fans can do if they work hard to create some awesome Mario content for themselves. This is an un-official live action trailer from drcoolsex for a film based on Mario’s video game Mario Kart. The story is simple but heaps of fun, as you watch Mario training to return from his racing retirement to avenge Luigi’s fall and defeat Wario in the Grand Prix. This mini-film features all your favourites, from Yoshi and Bowser to Princess Peach, everyone is racing and the story is pretty cool for a fan made movie. Enjoyed this? Why don’t you write your own Mario themed stories that you and your friends can act out!

These are in no way all the awesome Real Life Mario videos out there, so if you want some more great Mario content to inspire you why don’t you check out our Mario channel where you can find other awesome Mario stories such as See the Super Mario orchestra make music! If you enjoyed these videos and feel inspired to get active with Mario in real life, let us know in the comments below!